I needed to give the figure painting and basing a rest for a while. So here is the first terrain board I have made, out of a planned series of four, or five.
It is designed as a testing ground for me to learn what works and so on. It is also meant to be a base for three of my HOTT armies - the Dread Elves, the Woodland realm and the Vikings as well (until I make them proper mpuntainous, fjord type terrain - not this year).
first up the whole three feet by two feet board. 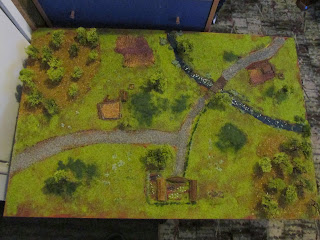 Next, a closer view of the stronghold, complete with base of cows and two bases of sheep.
The buildings, animals, hedges, fences, bridge, haystacks, hay carts and gibbet with victim are all irregular and very suitable. 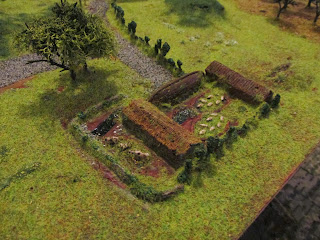 next the trees of a forest section. This will be bad going. It can also act as a no go zone for flyers and  a place for my woodland realm pixie lurkers to do their stuff. I wanted the trees to be widely spaced, so as to allow the troops to be visible and easy to move through. The change in flocking shows the boundary of the bad going. 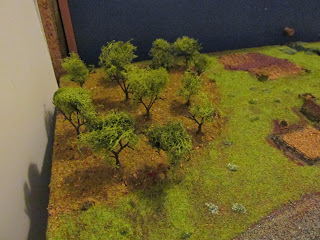 a close-up towards the bridge, taking in the hill, made from polyfilla, glue, flock and the tree. Also visible are the irregular fence, house and pig pen. I love the pig pen. That's an unusual, but somehow, lovely terrain feature. 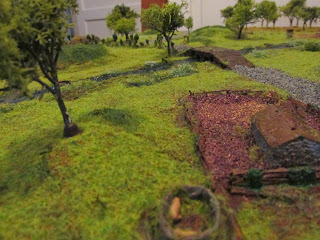 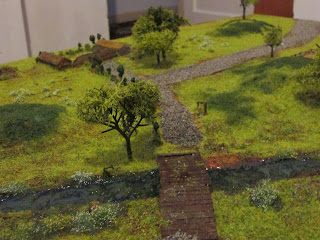 The bridge, river, road, gibbet with victim, and the stronghold in the distance. I mucked up on the river, as I wanted to do all this quickly and forgot that the water effect stuff wasn't dry. When I put the flock on the rest of the terrai, the water effect caught some of it and had to be re-done, leaving a sort of green tinge to the water. Maybe for the better - ho-hum. 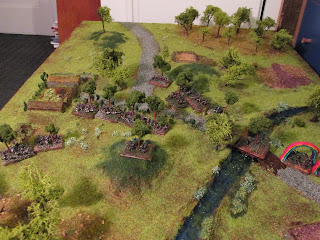 Here's what the terrain loks like with dread elves in it. 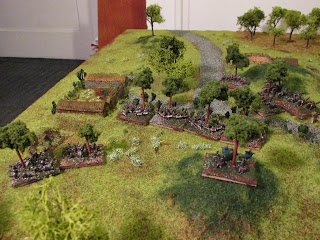 a selection of dread elves near the stronghold. The terrain will be used in many battles from the new year onwards. Being 3x2 feet it will look fine with a normal size command, a large 36 pointer, or even two commands. I wonder if 3 commands per side will be too big. 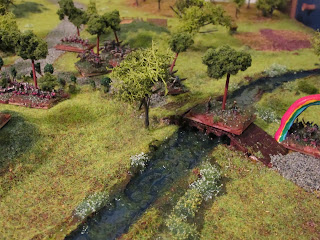 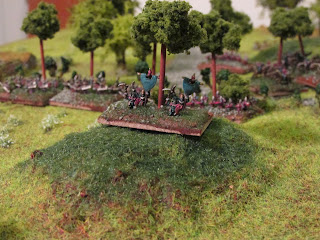 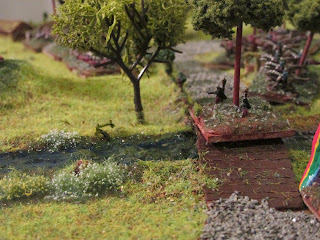 the dread elf wizards, daring the water to stop them.....

So next up I plan to do another terrain board. I reckon it'll be the Hephaistos volcano land, or the desert. We shall see. Not a perfect start, but good enough. Much still to learn. Hope you like.

for thecurious, here's those rainbow sneakers from the dread elves. 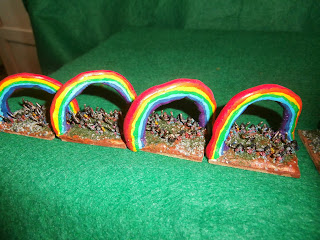